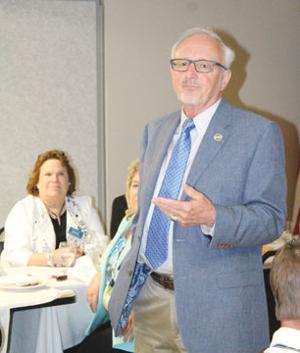 Morgan Moss, co-founder of Center for Therapeutic Justice, spoke about how proud Emporia-Greensville should be of the Community Model in Corrections program at the local regional jail.

Emporia has something to be proud of but they might not for much longer. That was the message brought to members of the Emporia-Greensville Chamber of Commerce during the May monthly luncheon by its speaker, Morgan Moss, co-founder of the Center for Therapeutic Justice.

He spoke about The Community Model in Corrections at Southside Regional Jail. No other program has had the success that this program has had, stressed Moss, noting that as of June 30 the program will run out of funds and with it the chance for inmates who want a better life when they return to society to be able to get the help they want.

In the past 12 years, 1,800 inmates have completed the program. The national average of recidivism is about 50 percent, but amazingly, at SSRJ, the rate is only 14 percent.

It costs taxpayers a fortune to keep someone incarcerated but this program has given the inmates hope for a better life but first they have to learn the skills they need to make it on their own after being released. In this program, the inmates give themselves and each other a far better chance of not being locked up from the outside world again than they would have had without the program.

Don’t think that it doesn’t matter what these inmates go through while in jail, Moss said. “Most people never see what goes on behind bars. It’s not pretty.” About 20 percent have mental issues and another 60-70 percent have addiction issues. So about three-fourths of inmates have one or both of these problems to deal with. “So what happens to a person when they are locked away in a cage? It doesn’t do anything for them,” Moss said.

He showed the other side of the issue, the person and what happens to a person when they don’t have the same chances that most of us get. The environment in jail is bad, it’s very bad, but so is the environment that most of these prisoners were brought up in, he said. “You learn from your environment and culture,” Moss said. “If you grew up in the same culture, abusive environment, went through he same things some of these people have….where would you be today? Where would we all be?” he asked.

Moss said that sitting with the inmates in this program, which are not housed with the rest of the population, he is amazed at how much the inmates help not only themselves but the others in the group that also want a better life when they are no longer behind bars.

It’s amazing to see the inmates suddenly start treating each other with dignity and respect. “This changes the culture of incarceration,” he said, noting that about 100-120 people a year have changed their lives taking this program while incarcerated.

He told the large crowd they didn’t know how lucky they were to have a jail that even offers any kind of program to inmates, especially one that is a model to all the other prisons in all the other states. Only the local regional jail has started a program that has actually made a difference in so many lives. It would be a shame for that to end due to the lack of money.

Moss praised Col. Karen Craig and her staff for all they do at the jail. All of the funding for the program comes from small things such as taking the profits from the canteen program to use. The program is so important that the few people keeping it going has taken $20,000 out of their own pockets so that it would not end. But that can’t last any longer. People at the jail have done all they can to sustain the program, now it is up to others to help or it will be shut down.

“These are real people, they may have been raised different than you but they have real issues and it ends in incarceration but this program has turned their lives around 180 degrees. The program makes the inmates take a long, hard look at themselves and they learn from each other.”

A lot of problems faced by inmates are addressed by the Community Model, which is run by the inmates themselves. They have learned that they have to be respectful and show respect. There were no incidents , fights, etc, involving inmates last year who were in the program, said Moss, much to the astonishment of every one in the room. “This is not true of any of the other model programs that have been tried. This program is the one exception.”

People think that they want to inmates to work hard but in reality they are still locked up but with a program at SSRJ inmates are part of something bigger than themselves. For many of the inmates it is the first time they have had a chance to actually be part of something constructive. They have to solve their own programs, find their own answers and learn the skills they need to make it on their own.

He went on to say that the inmates learn more about themselves in a month in the program than they do in other programs with psychiatrists, etc. “They get a chance to recognize what skills they have, don’t have, and what they need to work on and they work on them until they are satisfied,” he said. “It’s not an easy ride. You have to apply yourself.”

They forget about the “us against them” attitude and work together. The inmates are challenged to learn to grow and deal with many issues, the ones that they didn’t deal with earlier in life that landed them in jail. “There is a lot of different methods to get to the same point,” he said.

In the classes, inmates debate different view points. They aren’t told what to think but instead learn what works for them and it changes their character, Moss stressed.

“I just can’t imagine what is going to happen on June 30 when there is no money left to continue this program. We have done what we can.” Moss said as he looked from face to face at the audience. “This program belongs to the Emporia-Greensville community. It’s yours. It’s something to be proud of. What happens to it is now up to you.”

Moss encouraged people to check out the program and to pass along the message about this great program before it is too late.

The Community Model program begins with support from the jail administration and an invitation to all those incarcerated to join. Those who volunteer to participate move to a designated living unit within the institution.

Specific activities, supplemented by the best multi-media and written resources available for this population, encouraging candid and honest dialogue among peers, are scheduled for 12 hours a day within this 24/7 designated living unit, Moss said.

Together they assume responsibility for their personal outcomes, learn new tools for communication, behavior, and changing themselves internally -- essentially “re-parenting” themselves. Their work is done sitting in a circle and in small groups led by volunteer inmate mentors.

The sense of belonging, contribution, empowerment, and equality in this well-established process leads to higher levels of ownership, motivation, participation, positive attitude, and hard work as the community constantly builds and matures, he said. The community’s democratic principles and norms often exceed those of our society-at-large and are continued in the outside world by ex-offenders upon their release, Moss said.

The institution and correctional staff benefit from an unparalleled enhancement of the safe and orderly operation of their facility.

This model costs approximately one-fourth of traditional treatment, is open to all inmates, and reduces the recidivism rate from 50 to 14 percent….considered among the highest positive results in the nation.

The Model was initially funded through a 2005 Federal Grant and then by joint funding from District 19 Community Services Board, local funding and Southside Regional Jail non tax-payers funds. Due to budget cuts, these funds are no longer available.

“In order to continue this valuable service for two years we need to raise $100,000.” For more information or to make a tax deductible contribution visit: www.communitymodel.org.

Thelma Dugger also too a few minutes to talk about Exodus: Phase II Support Group. Dugger is the Founder and President of the Exodus. Their meetings are held the second and fourth Thursday from 6-7 p.m at Bearean Light Ministries at 413 Ingleside Ave. The meetings are to help support individuals that have previously been incarcerated, by coming together to share past experiences and future aspirations.

The purpose is to provide resources, encouragement and insight to men and women who are going through common issues and struggles, she said, noting that they work with people after they get out of jail or prison to find housing, work and more. More businesses are needed to partner with the group, stressed Dugger. “To have a chance they need to be able to work. If they aren’t hired then they will do the same thing as before,” she said.

She went on to say that Exodus has advisors such as John Holtkamp, Director for the Emporia-Greensville Dept. of Social Services, Dr. Doretha Allen of Bearean Light Ministries and Dr. Rev. Linda Richardson of Sanctuary of Serenity Church.

Dugger said that her vision has a transitional home located in this area for people transitioning from jail to society and who have no where to go.

She noted that Exodus partners with businesses, District 19 and that the group has Corey Lee as the Chaplain and James Browning, both ex-convicts working with the group. She stressed that when someone is referred to Exodus they do everything they can to assit the person needing help.

We're always interested in hearing about news in our community. Let us know what's going on!